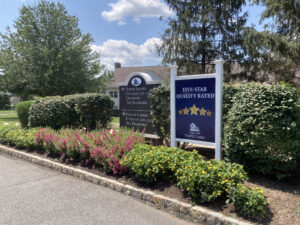 Read this inspiring case to learn how the Crane’s Mill rehabilitation team helped a patient improve from “I can’t do it.” to “Did you see how far I walked?”

Patient is a 73-year-old male with Parkinson’s Disease, previously independent, living at home with wife in condo with elevator access. He came to Crane’s Mill in January 2022 for sub-acute rehabilitation after sustaining a fall at home, which resulted in a hip fracture. Admitted for rehabilitation, and continued to live and private pay for physical and occupational therapy.

Upon admission, patient was extremely fearful of falling and would say “I can’t do it.” After one week, he was still only able to walk ~5 ft in the parallel bars. He required a lot of encouragement from the team and his family. Patient was also unable to feed himself due to increased tremors from his Parkinson’s.

Nursing helped to manage the patient’s Parkinson’s medication and provided wound care to his surgical site.

Throughout course of his therapy, patient became able to self-feed and improve transfers/mobility. He was no longer fearful of falling and became extremely motivated to return to his prior level of function. His wife visited daily, and enjoyed all our programs, particularly the performers (she would always dance alongside the performers).

Rehab would play “Eye of the Tiger” for him each time he ambulated to get him motivated and energized! He was excited to come to therapy every day, and instead of saying “I can’t do it!” he would tell anyone who would listen what he did in therapy that day, or say “Did you see how far I walked?” He was very proud of his accomplishments.

The patient was discharged from Cranes Mill in May 2022 to an Assisted Living Facility so he and his wife could live together again. At the time of discharge, his wound was healed and he was able to feed himself and perform lower body dressing with only a minimal amount of assistance. He became able to ambulate 300 ft w/ stand by assist, and go up/down 2 stairs.