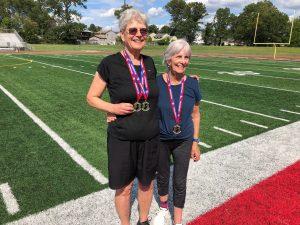 Lynne and her husband Archie became Crane’s Mill residents in 2013, moving from Glen Ridge to a cottage in the West Caldwell, New Jersey retirement community. In addition to athletics, Lynne is a nature enthusiast and accomplished artist who creates using watercolor and oil paints. She began to embrace her artistic side full-time after retiring in 2008 from a 40-year career as a social worker.

Mallory hails from Virginia but has lived around the world (Mexico, Libya, India, and Thailand) with her husband, Larrie, who was a diplomat with the US Foreign Service. When they returned to the US, they lived in Syracuse, NY where they both received graduate degrees. Later, they lived and worked in Raleigh, NC and Charlottesville, VA where Mallory taught language arts and social studies to sixth and seventh graders. In 2015 they moved into Crane’s Mill which is not far from their grandchildren. Larrie passed away in 2020, but Mallory continues to enjoy life and all it has to offer at Crane’s Mill. She loves to sew and knit as well as travel. She tries her best to learn something new every day.

Stay tuned as we continue to follow Lynne and Mallory as they compete in next year’s National Senior Olympic Games!

Want to schedule a tour or request a brochure? Fill out our contact form below and we’ll be in touch soon.