Congratulations to the “Mayor” of Crane’s Mill! 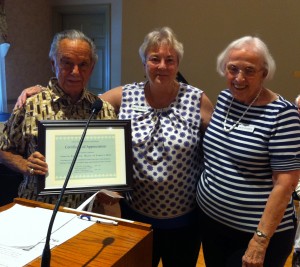 The Crane’s Mill Resident Association recently honored their “Mayor” Charles Farinella, for his contribution to the Resident’s Social Activities. Charlie, as he is fondly called, brought forth the Bocce Court, dancing with the ladies every week, during the weekly dancing hour, has helped in creating “Movie Night” almost every night and oversees the playing of Bingo every week at Crane’s Mill. Charlie moved to Crane’s Mill when the CCRC opened in 1998, and he is still going strong.