Crane’s Mill Neighbors of the Week – Don and Connie Guida

Say hello to our Crane’s Mill Neighbors of the Week!

Don and Connie Guida moved from Maplewood, NJ to Crane’s Mill in 2019.

Connie is a registered nurse who trained at Jersey City Medical Center and went on to earn a BS degree at Ohio State. She had a varied career: head nurse at Overlook Hospital where she set up the Intensive Care Unit, worked for the VA, did industrial nursing at AT&T, and ended up as a school nurse. She enjoyed the challenges of each phase of her career.

Don was a criminal defense attorney who started in private practice, but ended up in a large firm supervising over 60 lawyers. He graduated from Bowdoin College in Maine and Boston College Law School. Don served in the army in peacetime and spent 2 years at Ft. Dix.

The Guidas have been married 57 years and have a daughter and granddaughter who live nearby.

Connie and Don have many varied interests. A major one is theatre where Don started as an actor and went on to direct many shows. Connie also enjoys acting. They have traveled extensively.

Don has been a docent at Turtleback Zoo for 16 years and Connie has been an event planner at Newark Museum.

In 2020, Don and Connie were interviewed at Crane’s Mill by John Elliott for a CBS 2 ‘Grandparents Day’ feature. Check out this behind-the-scenes photo! 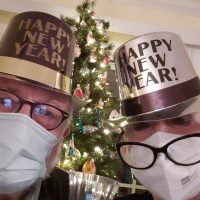 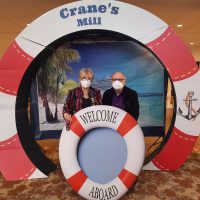 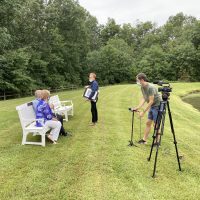