Say hello to our Crane’s Mill Neighbor of the Week!

You know Chef Dominic Ackerman from our Facebook Live Cooking Demos, and we’re excited to share more about our executive chef her as our neighbor of the week!

Born and raised in Morris County, Dominic Ackerman has always showed an enthusiasm for the culinary arts from a young age. After an early start in his grandmother’s kitchen, Dominic attended the Morris County School of Technology prior to studying classic French cuisine at the New England Culinary Institute in Montpelier, Vermont. Upon returning to New Jersey, Chef Dominic began learning the “ins and outs” of the Culinary Healthcare world in various high-end senior communities.

Dominic then honed his front-of -house skills in an upscale Italian restaurant in East Hanover, New Jersey. As a natural entertainer, Dominic works a crowd and brings a positive energy and exuberance to a dining room. Joining Nutrition Management Services Company in 2018, Chef Dominic has played a pivotal role in many aspects. While running a full service kitchen in Westchester, New York, Chef Dominic has applied his eye for detail to elevate accounts in both New Jersey and Pennsylvania. Dominic joined our Crane’s Mill team in April 2019. 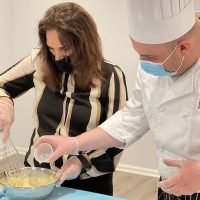 Chef Dom with Germaine during a Facebook Live cooking demo 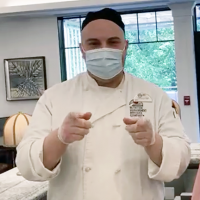 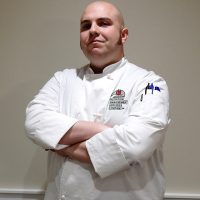